Home National News Odd News Father Marries His Own Son After Living Together As Couple For More...
Facebook
Twitter
WhatsApp 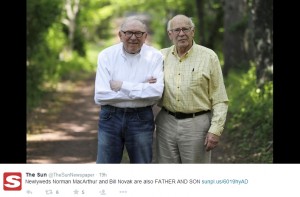 A father and a son got married in Pennsylvania, after living together as a couple for more than 50 years. Bill Novak and Norman MacArthur, both 70, vacated an adoption and instead became a married couple. Novak and MacArthur originally went through the adoption process for estate planning after being unable to marry in the state.

According to Scoop, The couple, who have been together for more than 50 years, registered as domestic partners in New York City, many years ago. After moving to Bucks County, they learned that state law prohibits same-sex marriages. They were advised by a lawyer to became legally related through adoption.

15 years ago, Novak adopted MacArthur. Now, the couple’s request to annul the adoption was granted, allowing them to marry. After receiving their marriage license, Novak and MacArthur said that they are happy to be married. They will hold a large ceremony for family and friends later this year.