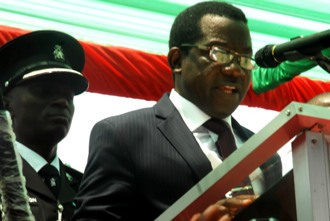 Governor Simon Lalong of Plateau state on Saturday said he inherited a cash balance of N93million and a debt profile of N104 billion from the immediate past administration of former Governor Jonah Jang.

Mr. Lalong disclosed this at the 2015 graduation ceremony of Saint Louis College Jos.

The governor stated that having started the payment of outstanding workers salaries, his next priority would be on security and education.

He said he would still give his best to the state notwithstanding the inherited liabilities.

Mr. Lalong debunked insinuations that he was part of the governors who went to President Muhammadu Buhari to ask for help in clearing the backlog of workers’ salaries because he had the option of taking a loan.

He promised to improve on the quality of primary and secondary education in the state.

Mr. Lalong said he also had to contend with myriad of other problems and challenges bequeathed to him by the last administration in the state.

He said this include a decaying and faulty educational system.

He said for any society to develop, there was need for a sound education system, adding that his administration would leave nothing to chance to ensure quality education.

Mary Katlong, a reverend sister and the Principal of the college, said there was need to improve the standard of education in the state and the country in general.

The principal expressed worry that Plateau came last in a national secondary competition that was held recently.

She therefore appealed to the governor to mobilise all that was needed to put education on the right pedestal.