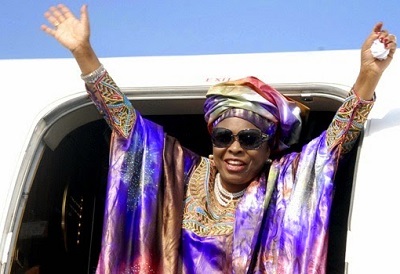 The Federal Airports Authority of Nigeria has said its security officials only stopped the convoy of the former First Lady, Dame Patience Jonathan, from carrying her to the foot of the aircraft on the tarmac of the Port Harcourt International Airport.

Mrs. Jonathan was reportedly barred from using the VIP lounge of the airport when she visited Port Harcourt on a private visit Monday.

The reports said she was denied access to the lounge by FAAN officials, who claimed their action was based on orders from “above”.

Reacting to the report, FAAN, in a statement on Tuesday, described it as misleading and mischievous, stressing that the wife of former President Goodluck Jonathan was not denied access to “the VIP lounge at the Port Harcourt International Airport on July 27, 2015”.

According to FAAN, all its security officials did was to stop the former First Lady’s convoy from gaining access to the tarmac where her aircraft was parked.

FAAN said, “The former First Lady’s convoy was only denied access to the foot of the aircraft during boarding formalities at the airport in line with international aviation best practices, strictly for safety reasons, as prescribed by the International Civil Aviation Organisation. Our security officials explained this fact to details of the former First Lady.

“We wish to recall that former President Goodluck Jonathan, in his recent trips from the same airport, had had to walk to the aircraft from the protocol lounge, in recognition of this ICAO regulation”.

The authority went on to explain that family members of former Presidents were officially entitled to use the VIP lounge, adding that Dame Jonathan was not an exception.

It said, “We wish to state that no such thing happened as Dame Jonathan, like other family members of former Presidents and other designated principal officers of government, are officially entitled to the usage of airport VIP and protocol lounges under the management of FAAN”.