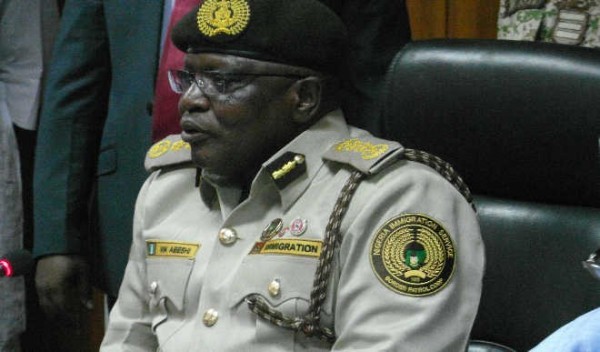 The Comptroller General of the Nigeria Immigration Service, Martin Abeshi, has threatened to expose government officials and politicians illegally holding on to Nigeria’s diplomatic passports despite requests for them to return them.
Mr. Abeshi also disclosed that the NIS recently lost three of its officers to insurgency in the North East region.
The immigration boss stated this while unfolding his programme for the service in Abuja on Thursday.
According to the NIS comptroller general, so far, only 200 former government officials had returned their diplomatic passports despite a directive by the Federal Government to them to return the documents.
He said, “I want to use this time to re-emphasize that the collection of diplomatic passports from government official who are no more in the service has been encouraging.
“We have collected over 200 so far, but very soon we will publish the names of defaulters. But I am appealing to them to please bring them before we publish their names”.
He said President Muhammadu Buhari upon appointing him as CGI last month, gave him the mandate to fight corruption at the passport offices, airports and other departments of the service.
Mr. Abeshi said the NIS was preparing a document that would be help to effectively control the movement of Nigerians in and out of the border areas.
He explained that the prevailing system of managing Nigeria’s borders had become obsolete going by the technological advancement being witnessed all over the world.
According to him, the document would be presented to the government soon.
Abeshi also said the NIS now had a new Immigration Act, which would check passport racketeering.
“The Act provides for penalties to be meted out to officers who abuse the passport process. If you do it you will be charged to court and if found guilty, imprisoned”, he added.
Meanwhile, the service has again maintained its innocence in the process that led to the issuance of the Nigerian Visa to the wanted ISIS chief, Ahmed Al Assir in Lebanon.
“From the record available, the Immigration Service did not issue that visa. It might be the officials of the foreign affairs ministry because they also issue visa on our behalf”, Abeshi said.
He, however, said the NIS immediately swung into action and arrested those connected to Al Assir once it gathered intelligence that he was coming to Nigeria.
“When we were told that the person [Al Assir] was heading to Nigeria, the people the man was coming to visit were identified by our men. Our officers in Kano went into action and arrested the two of them immediately and handed them over to the National Security Adviser”, Abeshi maintained.