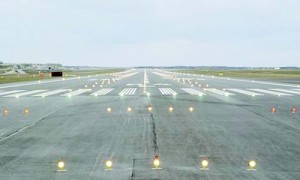 Speaking during her handing over in Abuja, Bello, who is now with the Ministry of Women Affairs, affirmed that she was not able to offset up to N1 billion of the debts in her six months stay in the sector.

“There is no ministry, former or new, that has no challenges and the challenges of the aviation sector are as usual as you know.

“Funding remains the main issue of the sector. I know when I took over, l met a debt of over N100 billion and l was not able to pay back even N1 billion, so it’s a huge challenge.

On the second runway at Abuja airport, a project which Senators recently dismissed over its inflated price, Bello said: “We have, at the moment, an issue which has turned to be a national issue and everybody is looking forward to it.

“There is also the need for construction of the second runway in Abuja. You are also aware that the existing runway at Abuja is over 30 years old, it has given way and there is need to construct a new one and I would want to mention here that no contract on the second runway has been awarded.”

While welcoming the Minister of State for Aviation, the new Permanent Secretary of the Ministry of Transportation, Mr Sabiu Zakari, pledged the support and loyalty of staff to the minister. He also admonished the staff to support the minister in his duty to achieve Buhari’s administration focus of change mantra.

On his priority as the Minister of State for Aviation, Senator Hadi Sirika, said the reconstruction of a second runway of Abuja International Airport was a disaster in waiting if not fixed as soon as possible.

“I am very young in the industry but where l trained, we have eight runways and a single runway is just an invitation for disaster and that is why we have to do it, it is a must, it must be done,” he said.

He also said the remodelling of airports across the country, introduction of development fund for aviation and maintaining and sustaining existing structures in the sector were paramount to the current administration.

Sirika assured Nigerians that every fund meant for projects in the aviation sector would be judiciously and appropriately used to bring the desired change.