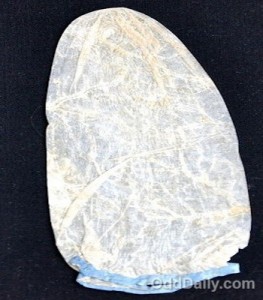 The Mirror reported on Feb 17th, the condom made from sheep intestines was used in the 18th or 19th Century. It got the record price of USD 462 when sold online. The oldest condom really was rare and there are only few similar samples stored in the museums. Condoms from the Middle Ages were usually made from the intestines of sheep, pigs, cows and goats. Due to expensive price and long time production, they were used only by the wealthy. After cheap condoms were produced in the 19th Century, condoms made from sheep intestines were no longer used.

The auction on the Catawiki site attracted more attention, making the condom to reach double selling price than its estimated value and became the world’s most expensive product. The condom was found in France and it reached up to 19 cm in length. The other samples that have been preserved from this time have 15 cm in length. Today, the average length of condoms is about 18 cm.

“The ancient condom from sheep intestines is really remarkable. It helps us have a closer look at the history and the way people have evolved over time. Therefore, during the auction, many museums expressed their excitement”, said the representative of Catawiki page. The highest bidder came from Amsterdam, Netherlands. According to the Catawiki, the buyer did not say what intend to do with the condom.