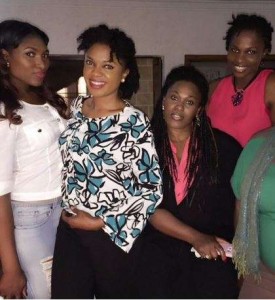 About 2 weeks ago, famous Nollywood actress Chioma Akpotha, posted a tweet that look like she was taking a shot at fellow actresses Uche Jumbo, Omoni Oboli, Blessing Egbe, and Ufuoma McDermott.

The actresses felt like Chioma Akpotha was taking a shot at them and aptly responded.

She explained that she was not throwing a sub or dissing any actress in the picture.

The actresses accepted this and they all kissed and made up.

Apparently, the initial tweet and the drama surrounding it was publicity stunt.

On February 2, (four days after the Twitter drama) Omoni Oboli released the poster of her next movie ‘Wives on Strike’.

Only actress Blessing Egbe is not involved in the movie.