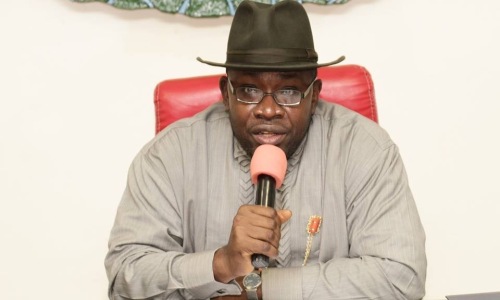 The Bayelsa State Government on Thursday confirmed that it got N1.24 billion as its share of the Federal Government bailout fund to states.
The Deputy Governor of the state, John Jonah disclosed this in Yenagoa, the state capital, during the government’s income and expenditure briefing for January.
He said the fund would be used to offset the backlog of salaries owed workers by the eight local government councils in the state.
Mr. Jonah said that the money was ready before the December, 2015 governorship election in the state, but the Federal Government refused to release it.
According to him, the government held on to the fund on the suspicion that if it released it, Governor Seriake Dickson would use it for his re-election bid.
The governor, nonetheless, emerged winner of the governorship election and has since been sworn in for a second term.
“Yes, the money has been transferred to us now; it was ready before the governorship election and they felt that if the money was given to us, we will use it for election.
“They also felt that even if you pay salaries with it then, it will be a morale booster, so you will gain. So, they stopped it.
“Election is over, so we have to go through the process again and now we have the money”, the deputy governor said.
Mr. Jonah, however, clarified that the bailout was not a gift from the Federal Government, adding that the benefiting councils would pay back according to the proportion they would receive.
He said the money was given to Bayelsa based on the requirements of the councils, explaining that it was for this reason all councils would not receive the same amount of money.
“Some councils are owing more than others, so they will get more than what others will get.
“Councils that will get twice more than others will pay back twice more than what others will pay”, he noted.
The News Agency of Nigeria (NAN) gathered that council workers in the state are owed between eight and 10 months’ salary.
In January, 2016, the state government accused the Federal Government of depriving it of the bailout fund.
(NAN)