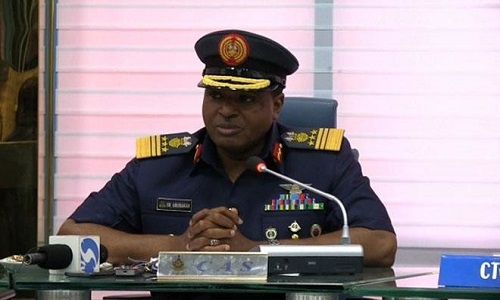 The Boko Haram insurgency in parts of the northeastern part of the country would soon be over.
Giving this assurance on Thursday when he paid a maiden visit to the 207 Special Mobility Group of the Nigerian Air Force in Calabar, the Cross River State capital, the Chief of Air Staff, Sadiq Abubakar, said that the military was at the “tail end of totally eliminating the Boko Haram insurgency in the North-East”.
According to Mr. Abubakar, an Air Marshal, the movement of the sect in long convoys from one village to the other, killing innocent people has been curtailed.
He said that the military has re-captured most of the territory that were previously in the control of the sect.
“We are not only winning the war against Boko Haram, we are actually at the tail end of the battle.
“It is just a matter of time; this issue of insurgency will definitely come to an end.
“If you visit Maiduguri today and witness the level of economic activities going on, you will believe with me that peace is fast returning back in that area.
“In counter insurgency operation you cannot automatically rule out any chance. Where are these female suicides coming from? Who is arming them?
“Boko Haram have been degraded and like I said, we are at the tail end of the battle”, he assured.