17-Year-Old Boy Kills Own Mother, Accuses Her Of Making Him Impotent 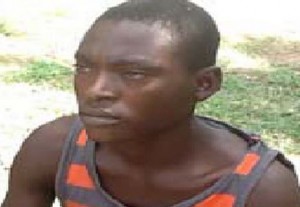 A 17 year old chap named Agayo Lorzenda is currently cooling off in police custody after murdering his mother in cold blood. Lorzenda shot his mother with a locally made gun after accusing her of using witchcraft to make him impotent.

“I went to consult the oracle over my impotence and I was told that my mother used my manhood for witchcraft and rendered me impotent. She did not want me to be a man.So my friend advised me to kill her so as to use her blood to acquire spiritual powers that will help me become rich and also do many other things. That was why I shot her.”

Share
Facebook
Twitter
WhatsApp
Previous article6 Types of Workers You Would Find In A Nigerian Company
Next article7 Kinds of People You Would Find In A Beer Parlour In Nigeria
- Advertisement - Ad ==> TRUTH FINALLY OUT! Discover how a young Nigerian graduate now makes a consistent 40k per week doing a legitimate online business. You too can start yours now, click here!!!