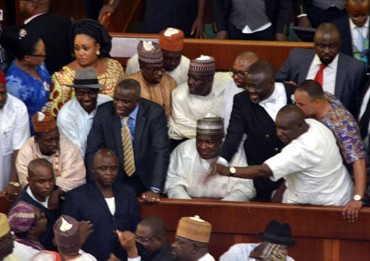 What was supposed to be a special session to discuss the recent removal of fuel subsidy by the federal government was on Monday morning turned into a rowdy session as lawmakers engaged in a shouting match.
Following a scheduled presentation by the Minister of State for Petroleum, Ibe Kachikwu, who was summoned by the lawmakers to explain the decision to remove subsidy, lawmakers from the opposition Peoples Democratic Party (PDP) opposed his admittance into the Green chamber.
However, Speaker Yakubu Dogara, who overruled the PDP members in the admittance of the minister into the chamber, got more than he bargained for as the session went into a sustained rowdiness.

PDP members, who carried National Flags, stood up, and started shouting “No”, “No” in reaction to Dogara’s decision to overrule them, and subsequently disrupted the proceeding.

They unanimously waved the flags, shouting “All we are saying, save Nigeria” for about 10 minutes, as the Speaker watched the unfolding scenario helplessly.

Deputy speaker, and other principal officers appealed to the members, but the shouting became louder, when some APC members attempted to counter their colleagues.

When normalcy was restored about 15 minutes later, Mr. Dogara described the situation as the “beauty of the democracy” – for people to air their views freely.