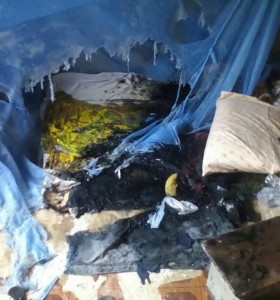 A 54 year old man is currently on the run for attacking his wife with acid, resulting in her death. Agya Kwaku alias ‘schoolboy’ poured acid on his wife,Maame Abena Safoah, 45, at their matrimonial home at Atwima Mim near Nkawie in the Atwima Nwabiagya District of the Ashanti Region,Ghana. Safoah suffered serious burns on her entire body due to the quantity of acid poured on her. The corrosive liquid also burned her mattress and floor carpet. The couple had quarreled that day over their inability to have children in the 20-year-old relationship.

An eyewitness, Akua Asantewa, who lives in the same building with the couple said that around 11 pm on Tuesday night, she heard loud screams coming from Safoah’s room. On getting there, the door was locked. She had to force the door open due to the loud cries of the deceased. Asantewa says she saw Safoah on the floor writhing in pain, she says as she tried to help her up, she felt a burning sensation coming from Safoah’s body.

Safoah then told her that Kwaku poured acid on her. Asantewa then rushed to call other neighbors for help. On returning with a few neighbors, they found Kwaku’s room in flames and later sighted him running away from the scene. Safoah was rushed to the Afari Community Hospital but was referred to the Komfo Anokye Teaching Hospital (KATH) where she drew her last breath.