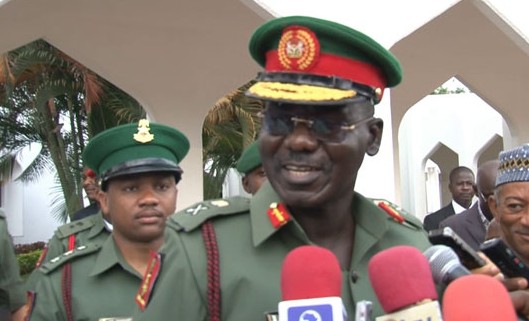 Some legal practitioners, including a Senior Advocate of Nigeria, Femi Falana, have condemned the federal government for clearing Chief of Army Staff, Lt.-Gen. Tukur Yusuf Buratai, on his alleged acquisition of choice properties in Dubai.

The Minister of Defence, Brig.-Gen. Mansur Dan-Ali (retd.) in a statement by his Principal General Staff Officer, PGSO, Brigadier General Mohammed Ahmed, cleared the Army chief of any wrongdoing.

The minister further described reports that Buratai and his wives bought properties in the commercial nerve centre of the United Arab Emirates, UAE, at the cost of $1.5million as an attempt by some unpatriotic and disgruntled elements to distract the leadership of the Nigerian Armed Forces from the successes in the war against terror.

Speaking on the purported ‘clearance’ of the COAS, a lawyer and activist, Mr. Ebun-Olu Adegboruwa said the clean bill of health handed Buratai cast a slur on President Muhammadu Buhari’s administration.

“I believe it has exposed the hypocrisy of the Buhari administration as not fighting the war against corruption on a clean slate. They should have allowed the agencies of government such as the Economic and Financial Crimes Commission (EFCC) and the Independent Corrupt Practices Commission (ICPC) to properly investigate (the matter). The Minister of Defence and the Secretary to the Government of the Federation have no statutory authority to undertake criminal investigation”.

On his part, former chairman of the Ikeja Branch of Nigerian Bar Association (NBA), Mr. Monday Ubani said the clearance was laughable.

He, however, said Buratai’s clearance did not represent the position of government.

“How can they be the ones to clear him? Are they security agencies? If somebody is alleged to have committed a crime, can another agency that has no constitutional powers clear him? On what basis did they clear him? They should have allowed the EFCC to investigate the man. It sounds ridiculous. That cannot be clearance”.

Falana, in his own reaction, slammed government for defending Buratai.

The human rights lawyer said it was not the business of the army to speak on the allegations against Buratai, adding that since public office requires public trust, the COAS should submit himself to the Code of Conduct Bureau (CCB) and the anti-graft agencies to clear his name.

“Buratai should willingly invite the CCB, the Economic and Financial Crimes Commission (EFCC) and ICPC to look into the matter. If Buratai was alleged to have unjustly purchased the houses, he has to come out to defend himself. He must show how the money used to purchase the houses was transferred”, the SAN said.