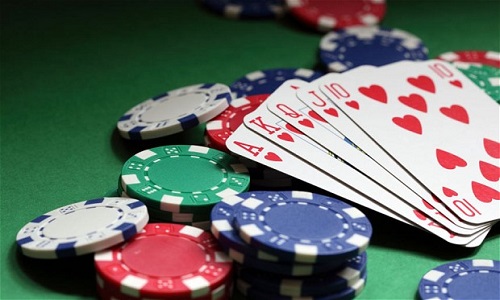 A housewife, Omotayo Adewole, 35, on Monday approached an Ikole Customary Court in Ekiti state seeking the dissolution of her 16-year-old marriage to one Ojo Adewole, over his addiction to gambling

The plaintiff had filed a divorce suit against the defendant, Ojo Adewole, on the grounds of drunkenness, failure in parental responsibilities, constant fighting, lack of respect for her parents and non-payment of her bride price.

In her testimony before the court on Monday, the woman alleged that her husband was an addicted gambler and a drunkard.

She lamented that gambling had made her husband a wretched and irresponsible family head that could not take care of the five children of the union nor provide for her as a wife.

She said the defendant spent all his income on gambling and drinks, “he is so addicted to gambling to the extent that he used my three cell phones, cooking stove and other house utensils to gamble.

“He started misbehaving since 2005 but I decided to cope with the situation hoping that he will change from the bad behaviour but nothing changed.

“He fights me, abuses my parents and threatens my life whenever I spoke against his gambling habit and am tired of him”, she stated.

The plaintiff further told the court that the defendant did not pay her bride price since they met 16 years ago and that she shouldered all the care and responsibilities of the five children from the union.

She urged the court to dissolve the marriage but allow the five children to be in her custody saying she would be able to care for them properly and asked for N20,000 monthly as maintenance allowance for the five children.

Two witnesses Mrs Rachael Oni and Kehinde Ogundipe, biological mother and elder sister of the plaintiff respectively, affirmed the testimony of the housewife and urged the court to dissolve the union.

The defendant, who did not object to the allegations against him, told the court that the plaintiff was the cause of all that happened to their marriage.

He, however, promised to narrate his own side of the story when called upon to defence.

Mrs Yemisi Ojo, President of the court adjourned the case to July 25 for continuation of hearing.