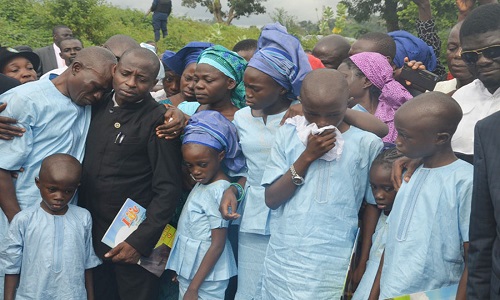 The president said government owed it a duty to bring the perpetrators to book.

President Buhari made the vow during the burial service for Deaconess Olawale at the RCCG, New Life Assembly, Kubwa, Abuja.

Represented by Secretary to the Government of the Federation (SGF), David Babachir Lawal, Buhari affirmed that every Nigerian has a right to practice his or her faith however he deems fit.

Recall that some unknown persons murdered Mrs. Olawale early hours of Saturday, July 9, 2016 while preaching at Gbazango area of Kubwa, Abuja. The FCT Police Command said some arrests had been made in connection with the murder.

She would have turned 42 years old yesterday.

“The federal government would leave no stone unturned to find these people and bring them to justice because it is important that Nigerians are assured of the fact that their government will go after whoever it is that makes life unsafe at wherever and at whatever time of the day”, he said.

Mr. Lawal described the deceased as a martyr for Christ “because she died on the battlefield, she died doing what the Lord Jesus Christ taught us to do, make the disciples of all men in the name of the father, the son and the Holy Spirit and she died doing this”.

The wife of the president, Hajiya Aisha Buhari, represented by a former deputy governor of Plateau State, Mrs Pauline Tallen, also spoke in the same vein at the funeral service.

She said: “Hajia Aisha Buhari’s heart is with the church and the nation. She also wants to encourage them to accept the incident as an act of God. Eunice is a heroine of Christ and a martyr. We know she is rejoicing with the angels in heaven, and Hajia assures the family of her support”.

In a sermon at the service, the Regional Pastor and the pastor in charge of Region 10, Abuja, Emmanuel Ibitayo, said that Eunice Olawale did her best and died as a servant of God.

He said: “some people wanted to carry placard but I said it is not necessary because nobody can defend God. She died while publicizing the gospel and the gospel is about peace because Christ is the prince of peace.

“When we visited the deceased’s family with Pastor Adeboye (General Overseer of the RCCG), he said we are not asking for justice but we pray to God that the killers’ lives are saved and hopefully they become pastors”.

The widower, Pastor Olawale, described his wife as a faithful trustee and a living companion.

Battling to control the tears that streamed down his face, an emotional Olawale said his wife was defenceless, “a sheep in the midst of Lions”.

Her last words, according to him, were: “the blood of Jesus”, stressing that Jesus Christ is worth dying for.

“You came, you saw, you conquered. I will surely meet you at the beautiful gate, good night”, the widower added.