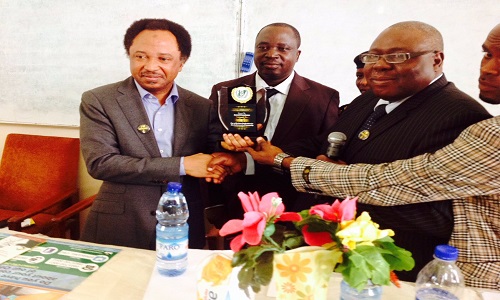 The senator representing Kaduna Central on the platform of the All Progressives Congress, APC, in the National Assembly, Shehu Sani, has called on President Muhammadu Buhari to urgently diversify the Nigerian economy.

Sen. Sani made the call after receiving an award from the Human Rights club of the Faculty of Law, Ahmadu Bello University, Zaria on Saturday.

He called on the president to invest heavily in the educational sector, and put emphasis on science and technology as that remained the only way to securing a formidable future for the country.

The Senate committee chairman on domestic and foreign loans, described the 2015 general elections as a revolution, saying the then opposition APC was able to win elections in spite of the incumbency factor enjoyed by the Peoples Democratic Party, PDP.

He also defended President Buhari for seemingly reneging on some of his campaign promises, saying the new APC administration made many promises without considering what was on ground.

He also called on government to introduce measures to cushion the hardship currently experienced by Nigerians.