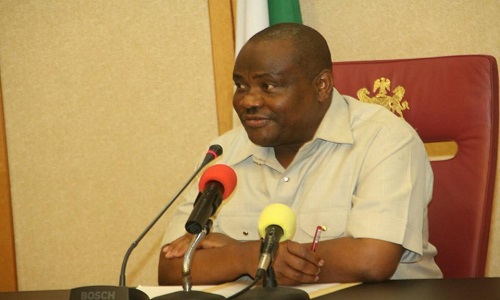 Johnson, who is the Eze Oha Apara IV, got his certificate, recognition and staff of office on May 27, last year, from the outgoing Rotimi Amaechi administration but Wike withdrew the recognition, bestowing it on one of his associates instead, Mr. Chike Worlu-Wodo, who is now the new paramount ruler of Apara Kingdom.

Addressing reporters yesterday at the palace of Eze Oha Apara IV in Rumuigbo, Port Harcourt, the people of Apara Kingdom urged the Federal Government and security agencies to intervene in the alleged injustice.

Eze Johnson made a brief appearance at the meeting but had to leave to attend to other matters outside the palace.

The immediate past Chief of Staff, Government House, Port Harcourt, Chief Tony Okocha, who hails from Rumuigbo in Apara Kingdom and an ally of former Gov. Amaechi, expressed shock at Wike’s withdrawal of government recognition of the monarch.

Okocha noted that the governor and his “cohorts” were inviting anarchy in the peaceful kingdom, even as he expressed confidence that the situation would not be allowed to degenerate into civil disobedience.

Speaking in the same vein, the President-General of Ekinigbo Youth Council, Dele Jnr. Egeonu, said he and other members of the council were pleading with other youths to avoid violence.

He, however, urged the Federal Government and security agencies to prevent anarchy.

Egeonu said Johnson must be reinstated for peace to reign in Apara Kingdom.

But Wike, who reacted to the mounting discontent to the removal of as paramount ruler of Apara Kingdom, through his Special Assistant on Electronic Media, Simeon Nwakaudu, insisted that his administration took the step to ensure peace.

Apara Kingdom’s residents, through the Ekinigbo Clan Council, said they were troubled by Wike’s “vexatious and utterly malicious move”, purporting to have withdrawn the king’s official government recognition.

It said: “Eze Oha Apara, Eze Gift Eziwho Johnson, was properly selected by the Rumukesiorlu Royal Kingmakers, after due consultations. He was properly coronated and duly presented to the public, in line with the established customs and tradition of Ikwerre people, for the purpose of installing a bona fide occupant of an ancestral stool.

“The purported cancellation and withdrawal of government recognition from Eze Gift Eziwho Johnson by Governor Wike were maliciously conceived to ridicule our ancestral stool, embarrass the incumbent and cause anarchy in Apara Kingdom. The action was not only taken in grave error, it is vindictive and vexatious against due process, null and void and of no effect whatsoever.

“We wish to state categorically that the Ekinigbo Clan Town Council will not allow anybody to play vindictive politics with our highly-revered ancestral stool, as Governor Wike appears to be doing, by claiming to have ‘selected’ and ‘installed’ Mr. Chike Worlu-Wodo as ‘Eze Oha Apara’”.