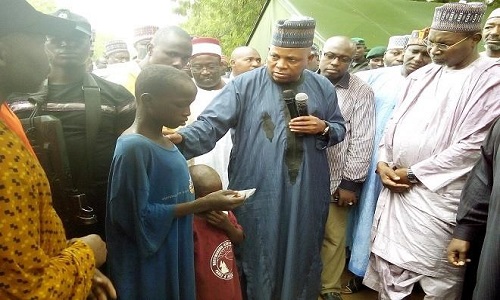 Governor Kashim Shettima of Borno State yesterday paid condolence visit to the family of a Mr. Ben Aidokanya, a journalist, who died on Tuesday after a protracted illness.

During the visit, Governor Shettima, who was represented by his spokesman, Isa Gusau, announced N1 million support for the education of the late journalist’s children.

Mr. Gusau visited the late Aidokanya’s widow in Maiduguri, the state capital and was received by the President, Idoma Community Association in Borno State, Mr. John Akogwu, who was full of gratitude for Governor Shettima’s gesture.

Handing over a letter of condolence from Alhaji Shettima to the widow of the former correspondent of the Nigerian Pilot newspaper, Mrs. Mary Aidokanya, the governor’s spokesman pleaded that the fund be exclusively used to support the education of the three children the late journalist left behind.

The letter read, “With very heavy heart and empathy, His Excellency, Kashim Shettima, the Executive Governor of Borno State extends his deepest condolence to you, your children and extended family over the demise of your good and dear husband, Mr. Ben Aidokanya”.

Gusau also announced that Governor Shettima had ordered the release of a government ambulance to convey the journalist’s corpse to Effeye Ipole village of Ugboju district in Otukpo local government area of Benue State for funeral rites as decided by his family while he mobilized some friends of the deceased to attend the funeral.