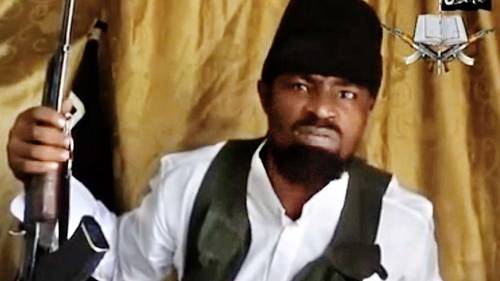 Ibrahim Shekau, long-time leader of the Nigerian Islamist militant movement, Boko Haram, rejected his replacement at the helm of the group by Islamic State, to which he declared allegiance last year.

Shekau made the announcement in a YouTube audio recording on Thursday and described the new leader Abu Musab al-Barnawi as an infidel who will never earn his allegiance.

“People should know we are still around. We will never cause any discord among the people, we will live by the Koran

“We are committed to to our stand to establish Sharia law

“This is our stand and we remain in our capacity as Jama’atu Ahlissunnah Lidda’awati Wal Jihad,” Shekau Said in the 10-minute audio.

The Associated Press reported on Wednesday, citing an Islamic State newspaper that the new leader, Al-Barnawi promised not to attack mosques or markets used by Muslims.

Boko Haram militants have waged a violent campaign since 2009 to impose their version of Islamic law in Africa’s most populous country of about 180 million people, killing more than 20,000 people and forcing 2.6 million people to flee their homes.

From northeastern Nigeria, their campaign has spread to neighboring Niger, Cameroon and Chad.