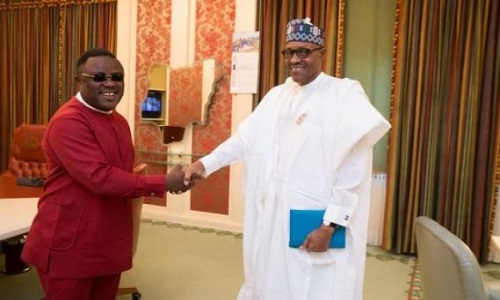 Governor of Cross River State, Prof. Ben Ayade, yesterday said though he belongs to the Peoples Democratic Party, PDP, he works harder than most All Progressives Congress governors in projecting the image of President Muhammadu Buhari.

Ayade said he ended politics soon after the 2015 general elections that ushered him into office and wished that other elected governors would tow the same path for the betterment of the common man.

“I am in love with the style and ability of President Muhammadu Buhari as leader of Nigerians. He does not see himself as a party leader but as father of the country.

“His efforts at streamlining the country’s resources, as well as tackling corruption drew me closer to him. Besides, he has shown me love even though I am of the PDP. He gives utmost and prompt attention to my requests”, the governor disclosed.

Mr. Ayade said he was now desperate to make a difference as a governor of Cross River State, and that he would spend the next one year commissioning projects.