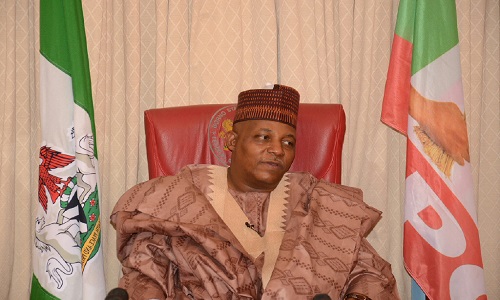 Fifty children orphaned by Boko Haram insurgents were awarded scholarship with their tuition paid upfront for the next 9 years in commemoration of Borno state Governor Kashim Shettima’s 50th birthday anniversary.
The award was sponsored by a group of 30 friends, family members and political associates of Shettima, who yesterday organized a reception in honour of the governor at the multi-purpose hall of the Government House in Maiduguri.
Secretary to the Group of sponsors, Malam Isa Gusau, who is also spokesman to the governor, announced a list of 30 donors, who made payments of various sums into his personal access Bank account which he in turn issued bank drafts for payment of tuition fees for the 50 orphans.
Two schools, Maiduguri Capital School and Bara’Imul Iman Integrated School, were paid to provide education, text and note books, school uniforms and bags for the orphans from their starting of school in September, 2016 to the year 2022, when those admitted into primary schools are expected to graduate and the years 2025, when younger orphans admitted into pre-nursery schools are expected to graduate.
Chairman of the Occasion and former Governor of Kano State, Senator Rabiu Musa Kwankwaso, who was in Maiduguri, said the organizers of the event chose to support orphans because they had seen Governor Shettima being passionate about educating orphans of the Boko Haram insurgency.

Kwankwaso also unveiled a 168-page compendium titled, “ Talks In Defying Terror” which compiled speeches, interviews, columns, Editorials and news reports published and aired by local and international media organizations on the activities of Governor Kashim Shettima from 2011 to 2016.