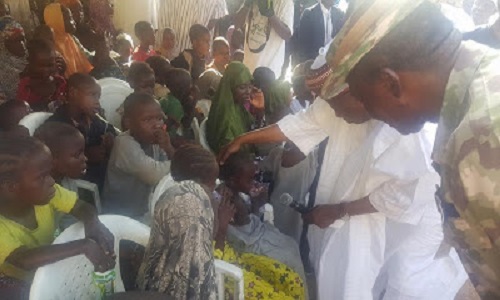 Governor Kashim Shettima of Borno State has explained why his government is accommodating and providing for the wives and children of Boko Haram fighters recently apprehended by soldiers during raids on terror camps in the state.

The governor made this explanation on Friday when he received some 568 women and children, rescued recently from Boko Haram captivity.

Mr. Shettima said dozens of women and girls, who were confirmed wives of Boko Haram fighters, were housed at a location within Maiduguri, the state capital, where the state government was helping them to get de-radicalized.

The women, who were forcefully evacuated from the jungle camps of Boko Haram by soldiers, were initially unfriendly and hostile as they kept insisting that they should be reunited with their husbands in the bush, the governor said.

One of such “wives” is a 12-year-old girl, who was rescued barely 24 hours after she was married off to a Boko Haram insurgent three times her age.

“Our ultimate aim in taking custody of families of insurgents is to cut the cycle of violence so as to secure the future of Borno State”, Mr. Shettima said.

“Our aim is to give education to the children of the insurgents so that these children will grow to despise the values and doctrines their parents lived and preached”, he added. 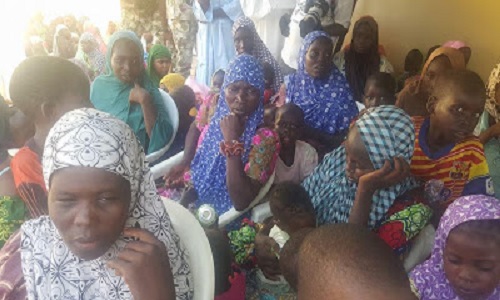 “An average male member of the Boko Haram has one great wish and that wish is for his son or daughter to inherit his doctrine of violence. The insurgents seriously take to child bearing as a strategy of not only multiplying their numbers but also producing children they hope, will continue from where their fathers stop in violent killings as their own form of worship.

However, by taking custody and caring for the children, the governor pointed out that they will not be exposed to any further indoctrination either directly from their father or through their mothers that have been de-radicalized.

“The children will not be trained with any element of hate for their parents, they won’t even be told about the ways of their parents so that they don’t grow with deflated self-esteem. These children will be raised like every other child, they will be raised to love and not to hate like their parents wished for them. They will be trained to save lives and contribute to building and growing communities not to take lives and destroy communities like their parents would wish. This is why we are determined to take care of these children”, Governor Shettima explained.