Home National News Woman spent her last 16 years in a cave, which led to...
Facebook
Twitter
WhatsApp
A 58-year-old Kenyan woman has been dwelling in cave for nearly 16 years. But living in the cave is the least of her problems. 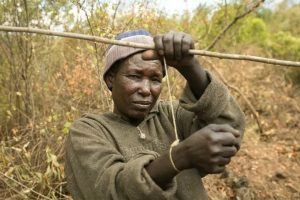 Hellen Tarko, who resides in some thick forest called Utut in the heart of Kenya’s Great Rift Valley, is suffering from a terrible flesh-eating disease that is threatening to take off all the meat on her face.
The disease has damaged her face so much that those who see her, including her fellow cave dwellers, get frightened.
The locals there even think she is cursed. “Those who have ever seen me like this seem very frightened by how I look. The disease is eating me up alive. Some say I am cursed,” says Tarko, a mother of three.
The disease, according to the medics, is called Cutaneous leishmaniasis. It is an extremely rare tropical disease that is transmitted to humans through parasites. The good news is that there is cure for it. The bad news is that those who reside in some far away forests like Tarko have no access to the cure.
Tarko, a local charcoal trader with paltry income, has been unable to get any medical assistance. She says there are no health facilities nearby, and neither are doctors. She tried the locally made herbs that those who developed the strange disease were using, but the traditional remedy backfired badly, leaving her more damaged than ever.
Fortunately, Tarko finally found medical help through a God sent community health worker who had paid them a visit in the wilderness.
Source: ( Gossip.naij.com)