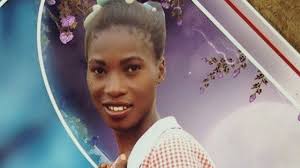 Two men, Babatunde Akinola and Oguntoyinbo Odunayo, have been arrested and paraded by Police in Ekiti State for alleged murder of one Miss Olomola Kehinde.

Kehinde was allegedly stabbed in the neck last week in Igede Ekiti, Irepodun-Ifelodun Local Government Area but she later died at the Federal Teaching Hospital, Ido-Ekiti.

Also arrested by the command were eight suspected cultists believed to be operating in Igede and Ado-Ekiti, the state capital, in recent times, Guardian reports.

A student of the Federal University, Oye Ekiti, Bamigboye Tolulope, was also paraded for allegedly raping a female victim in the community.

Speaking during the parade of suspects at Police Headquarters yesterday, Commissioner of Police, Mr. Bello Ahmed, disclosed that the murder suspects were arrested after a distress call was received from the deceased’s twin sister, Taiwo.

Parading the suspects in Ado Ekiti, Ahmed said the murder suspects, Odunayo and Akinola, allegedly stabbed the victim in the neck while perpetrating the killing. Ahmed, who spoke through the Police Public Relations Officer (PPRO), DSP Caleb Ikechukwu, said the incident occurred on August 28 at Ilamoye area of Igede Ekiti.

The CP revealed that Olomola died after she was rushed to the Federal Teaching Hospital, Ido Ekiti for medical treatment from the machete cut.

“A team of police operatives upon investigation found one long axe with blood stain at the scene of the crime and that the two suspects, who had direct connection with the murder were immediately picked up and are being thoroughly grilled to be able to extract useful information from them”.

He said the suspects would be arraigned in court soon after the conclusion of the investigation by detectives. Ahmed added that the suspected cultists, who were alleged to belong to Aye and Eiye confraternities were arrested at Odo Igede on August 29.