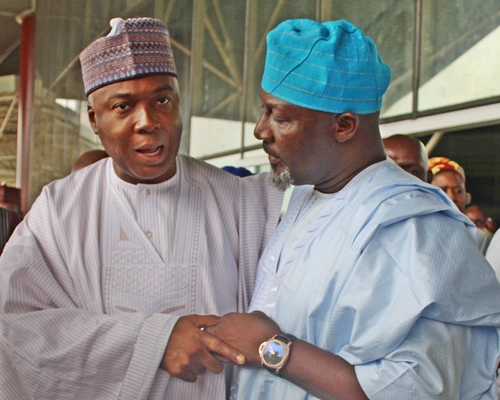 Senator Dino Melaye representing Kogi West on Thursday on the floor of the Nigerian Senate recounted his happiest and saddest days.

The lawmaker who recently declared his intention to run for Kogi state governorship election come November 2019 first thanked “the Almighty who is the supreme controller of the universe.”

He added that ” when cankerworms and caterpillars” were sent to attack the Senate President, Bukola Saraki, who is a close ally of the senator, he (Melaye) addressed Saraki as the “irremovable” Senate president.

He revealed further that his happiest day was the day Saraki was declared Senate president” and his saddest being the day, his colleague, Ovie Omo-Agege led thugs to steal the mace.

He said: “I thank the Almighty who is the supreme controller of the universe. When cankerworms and caterpillars attacked you, I addressed you as the irremovable Senate President, Bukola Saraki.

“To my surprise, many of those who orchestrated your downfall and removal has now called you their mentor, only God give and take power. ”

“The saddest day of my life was when Senator Ovie Omo-Agege led thugs to steal the Senate mace, a symbol of unity. ”