Reactions have gone wild on Instagram has social media users have been divided by the incident that happened in an airplane which saw a young boy who ordered prof. Wole Soyinka out of his seat. 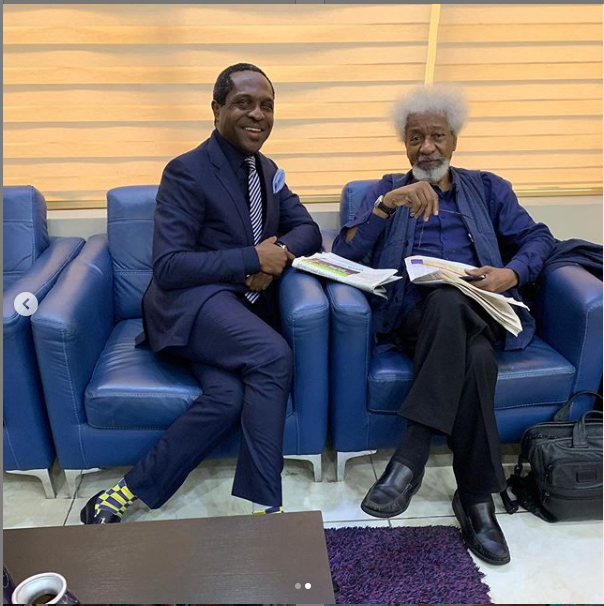 According to business Tycoon, Tonye Cole who shared on (Instagram) the incident he witnessed on the airplane, he said,

met one of the greatest Nigerians walking the earth today and as with other times, he was genteel, witty, forthright and humble. My smile gives me away as he permitted the picture whereas he would have preferred to get back to his newspapers. Then we boarded the flight and after assisting him with his bags, he took the window seat and promptly started reading again.
A few minutes later this young man, baseball cap, t-shirt to show his muscled chest and tattooed biceps boards the plane and tells Prof he is on his seat (which he was). Those of us including the cabin crew tried to reason with Bobo Fine to let the old man be but the chap refused. He insisted Prof should vacate his window seat, which the old man quietly did for his original aisle seat next to him.
I couldn’t understand how we got to this point where we no longer have respect for elders, even if are so ignorant of the great global personalities in our midst. Is it too much to ask that an elderly man be allowed to remain in a seat allotted to you in the same business class cabin and the same row?
Na wa o!

Check out the reactions people mad on Instagram and give your opinion on the issue;

@adadevol: Extremely Terrible. He Just Sowed A Seed He Will Definitely Reap.

@pegbuson: I’m sorry but I think the man acted well within his rights and please let’s leave this respect issue where it is. Where’s the respect for the young man when a seat he probably chose to enjoy the view during his trip is taken simply because the person who took the seat is old or because he is the legendary Prof? We can do better. Describing his clothing and tattoos is to buttress the argument that the “young man” lacks proper upbringing but that argument is neither here nor there. It was the young man’s prerogative to give up his seat and he chose not to. If you said he raised his voice or insulted Prof I would jump in and support the assassination of his character. But he simply stood his ground and demanded what was his. If we young people had been doing this, Nigeria wouldn’t be down in the dumps where it is today.

@amoganla: This is the power of the storyteller and how media and influencers wield that power. In as much as respect is important in our society, the young man was already painted in a wrong and unnecessary way. Fact is… it was the gentleman’s seat and he demanded his right which he was entitled to, period! Also, anybody else could have offered the Nobel Laureate their window seat.
@moabudu: So so sad. That young man will get what he truly deserves. That is definite!

@thereak_thelma: Respect is not demanded, it is earned. Respect is reciprocal, go to your assigned sit!!!! Respect isn’t age-based. Everybody deserves it! So everybody does the right thing!

@temmerz: Lol…. a man told another man that he was in his seat and y’all are making a big deal out of it. You guys don’t know what that’ man with tattoos has in regards to a phobia, or if he paid more for that window seat’. Nigerians make things about elderly and whatnot, how about everyone seat in their assigned seat, then we won’t have any problems and how about the Nigerian cabin crew do their jobs and make everyone seat in the seats they are assigned to
@iammeverick: This post really tried to belittle the unknown young man’s character and pretty sure it is wrong to post this picture without both person consent. It is his prerogative to vacate his seat. He acted best within his discretion and refusal to vacate his seat should not earn him vituperations that are best within the opinion of the writer. Subtle description of his person, clothing or tattoos are condescending n derogatory. I wish we can all stand up to our leaders to demand accountability

@uzosfoodlabs: Culture versus what is right. The manner of the asking was probably off. However, you should sit where you are assigned. Prof should have sat on his assigned seat and when the young man or whoever was in the seat he preferred came, said – would you mind swapping seats as I prefer the window seat? That’s the right thing to do. I am a huge fan of the Prof and I believe in respecting our elders. However, I wonder, do elders use their status to subliminally bully people too? Same question for known faces that’s take advantage of their celebrity and infamy to make people uncomfortable.

@bobbyezidi: This is why people are stealing the nation blindly and there is no outrage. You force people from very young ages to not speak truth to authority figures cos they are older. They grow with this mentality and can’t question their elected leaders.
Prof was in the wrong, for every reason Prof wanted to sit on the young man’s seat, the young man had that +1.
You also took time to describe the young man’s attire but failed to describe Prof’s attire. Why? Do you expect us to prejudge the young man based on what he wore?
Nigerians!! The young man paid for his seat, perhaps chose his seat for reasons best known to him, he shouldn’t be bullied or blackmailed into giving it up. Prof could have easily just sat in his original seat.
This is y we are still where we are! Despicable

@faffyian: All the comments here about this issue is okay. However, we need to understand that what you value may not be of any value to another person. Comments have been based on what has been posted without hearing from the young man for his own perspective. He had every right to request for his seat also the right to let go if he so desired without being persuaded. Is it possible for someone to have said something that hit the wrong note and made him switch off. Was a rapport formed before and during the conversation? The internal state of the said young man is not known. Is there positive learning here? Yes! Know what your right and fight for what is yours. Prof knew the guy was right.
AdvertisementClick Here To Join The 10,000 Naira Giveaway For 100 People!