American singer, Tamar Braxton, set the social media on fire with a new raunchy photo which has since started garnering reactions on social media.

In the photo, the singer went completely topless with only her hands covering her breast.

Read Also: Tamar Braxton’s Boyfriend, David Adefeso Reveals What Going To Harvard Did For Him

Her Nigerian boyfriend, David Oyefeso, couldn’t help as he dashed to the comment section to drop his own comment.

‘@tamarbraxton WOW! talk about beauty, brains, and style all combined in one bundle of extreme sexiness.’ 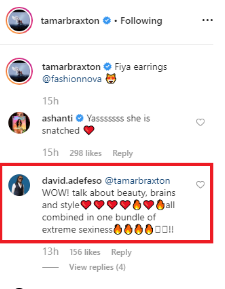