A Twitter user identified as @Detola_ has shared the story of how a couple allegedly committed suicide over wedding debt after just three days of tying the knot.

Even when another user opined that it could not have been the debt from the wedding because it happened too fast, she insisted by saying; ‘“It is! The husbands family said that’s what she kept saying”

“A lady was indebted after wedding and killed herself after 3 days, the husband drank sniper too and he’s dead now. Today makes it 7 days after wedding. I’m still in shock!!! Come and see shouts here o. For the first time this year, I had tears in my eyes I’ve never believed it until what I saw this night. It was really a terrible scene, wife still dey mortuary sef.” 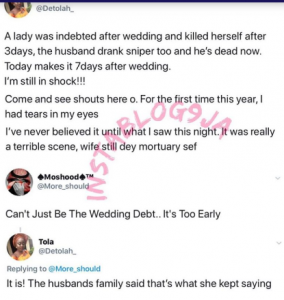