Actress Foluke Daramola has reacted on the viral rumour that her marriage has crashed.

Speaking in an Instagram post, the screen diva went on to shut rumour mongers by stating that nobody was there when the love began.

She then concluded by describing her husband as her rock, her ben10 and everything.

It’s our lives, it’s our love, it’s our conviction, nobody was there when we started so nobody should act like he owns a sense of entitlement to our marriage cos its beyond anyone. Thanx to everyone that reached out to me one way or another I love and appreciate u all and most importantly ayinde me @olukayodesalako thanx for being my rock, my ben10😜my superman😂😂🤣my everything I love u so much and it’s about us and nobody else. No matter how anyone trys to do aproko on our union it’s all about us my love. Happy birthday to me,happy anniversary to us in advance 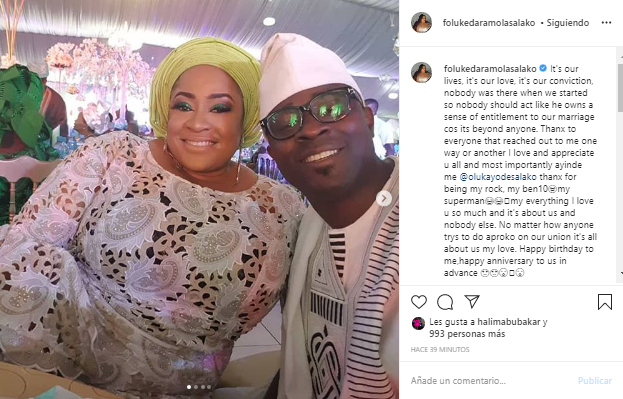