Celebrities such as MI Abaga, Kate Henshaw, Dija, and co are set to meet in order to stand against the proposed social media bill being considered by the National Assembly.

This was made known by MI Abaga via his official Instagram page where he invited the general public to be a part of the gathering.

“Tomorrow I am inviting anyone from the entertainment industry to join us in taking a stand against the “Social Media Bill”!!!

“It will happen at Kairo’s Hub, Providence Street Lekki, and will start 11am.

“Let all our voices be counted!!! Thank you for all the support so far guys!!! 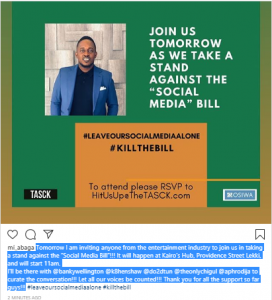