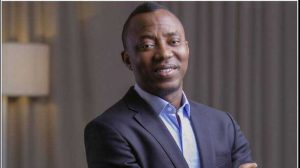 Activist and presidential aspirant in the African Action Congress (AAC), Omoyele Sowore has asked Nigerians to embrace new ideas and initiatives for the 2023 elections.

Sowore spoke on Saturday in Akure, Ondo state capital, after his arrival in the state for consultations ahead of the 2023 elections.

Speaking with journalists, the activist said he would visit his hometown in Kiribo, Ese-Odo LGA in Ondo state — for the first time since his arrest by the Department of State Services (DSS) in 2019.

The publisher described his incarceration by the DSS as a “complete waste of time”, adding that no law court can justify his arrest for fighting injustice.

Sowore asked Nigerians to challenge those in power and inject “fresh blood” into the country’s political system.

He expressed optimism that he would be Nigeria’s next president in 2023.

“This is the right time to challenge those in power and bring those with fresh blood, ideas and initiatives that can change the narratives for Nigeria. The time for the nation to work for Nigerians has also arrived,” he said.

“Other political parties are even going into extinction, and we would help to consign them into the dustbin of history as soon as possible.

“For the people of Ondo state and those who have not heard, I, Omoyele Sowore, is going to be the next President of Nigeria.”