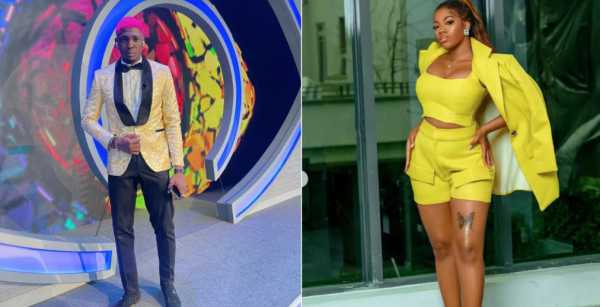 Former Big Brother Naija ‘Shine Ya Eye’ Housemate Sammie has expressed disappointment at his colleague Angel Smith after unfollowing him on Instagram.

Trouble started between Sammie and Angel after the latter kissed Kayvee during a truth or dare game on the reality TV show.

Displeased with the act, Sammie who seemed to love Angel cautioned her, but it all turned into a fight as the duo hurled insults at each other.

When Sammie thought that everything had been trashed after the reunion, Angel’s unfollowing came as a surprise to him and he took to Twitter to rant.

In the social media post, Sammie said Angel cannot hurt him twice and he would be silent on the issue.

He revealed that they had talked over the issue both in private and public but he was surprised that Angel can be angry again after watching the reunion show.

According to Sammie, Angel cannot take half of the things he had done to him and the public would criticise him if he exerts the same energy as her.

He wrote: “You can’t hurt me again! All I ever did was wish you well in private and public. Do you switch up on me calling me negative energy over something we have talked about over and over again we have even become closer, how do you watch something you were part of and get angry with me again? How about emotional abuse! How about manipulation. Why do people not see that I was abused?”

“I am really a good person tbh because If I do half of what you did to me to you maybe we will be hearing men are this and that but the person that you were using me to catch a cruise on top of my head played you and I still stood by you because I genuinely like you as a friend. You don’t have to be in a relationship to be abused!!! We are not in a relationship but you are angry over me doing my own thing. Mehn fucc you! I just want to tweet how I feel, leave me”