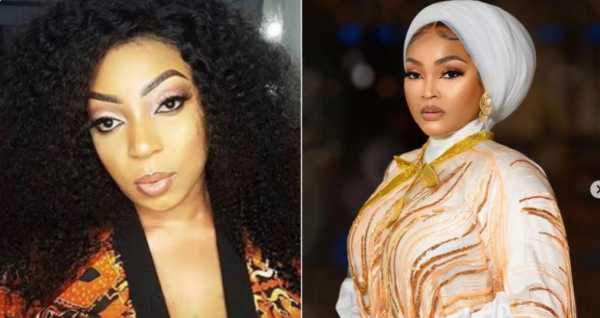 Lagos businesswoman, Lara Olukotun has issued a warning to Mercy Aigbe a few hours after she spilt details of what led to their public fight.

Recall that Mercy Aigbe in a lengthy Instagram post said she and the Lagos socialite have been friends until she started bullying her at every chance and refused to stop even after she reached out to her.

Mercy Aigbe explained that they were at a mutual friend’s store opening when Lara started disrespecting her as she normally does.

According to the mother of two, she initially ignored Lara but was forced to react when she refused to stop insulting her.

Responding to the post, Lara warned Mercy Aigbe never to call her name while addressing issues online because she has ignored the urge to explain anything.

Lara added that she’s not someone who chases clout on social media and Mercy Aigbe should not trigger her by mentioning her name henceforth.

She wrote: “LISTEN CAREFULLY, THIS IS SOCIAL MEDIA, PUBLIC PLATFORM. BUT DON’T CALL MY NAME TO ADDRESS ISSUES U DONT WANT ME TO REACT TO PERIOD. AV IGNORED EVERY URGE TO EXPLAIN & SHALAYE, & I DIDNT MENTION ANYONE NAME TO CHASE CLOUT COS THAT WHAT U SOCIAL MEDIA PPLE WILL TURN IT INTO”

“SO PLS DO NOT TRIGGER ME, BY MENTIONING MY NAME HENCEFORTH. Listen carefully, this is social media, a public platform. Don’t call my name to address issues u don’t want me to react to period.”