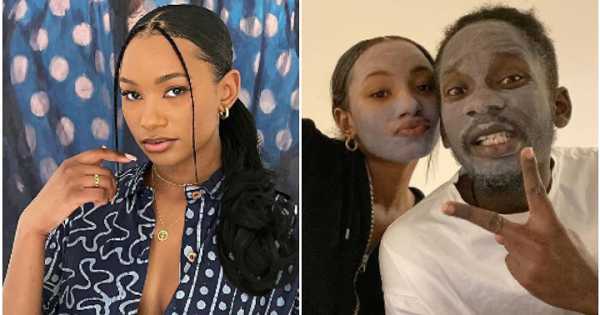 Oluwatosin Ajibade, popularly known by his stage name, Mr Eazi, and his wife-to-be, Temi Otedola, one of the daughters of Nigerian billionaire, Femi Otedola, has revealed that they would be having a private wedding.

The duo made this known in the latest episode of their podcast, ‘How far’.

Temi also noted that she has always been a private person hence the decision to have a small wedding ceremony. She stated that if it was left to her, only ten people would attend the wedding.

“I could have six people at my wedding, me, you and two witnesses, I’m extremely private about certain things and energies. So you are actually gonna be the one who would have more people to balance off the side but if it was up to me, it would be 10 people”

The groom-to-be also agreed with Temi’s decision noting why a lot of people won’t be attending their wedding adding that they expect nothing less than ten close family and friends at their wedding ceremony.

“I really enjoyed intimate families, people don’t really know how private our parents are because my dad is like, ‘if you wanna have just 10 people, whatever you guys wanna do for your wedding, just do it cos it’s two of you that would live together.’

“It’s as though your dad and my dad had a meeting, they said you guys should just take your time and plan your wedding, you can just have a small wedding in the house…”

They also noted that they’re not experiencing any form of pressure from their parents as to when they’ll be getting married.

Eazi also revealed he would love to have an afterparty with twenty guests after the wedding ceremony.

“I want it to be intimate but very quality, I want an afterparty even if it’s just 20 people.”

The singer and his wife-to-be revealed that they have not yet fixed a date for their wedding. He also teased his fans that he’d be releasing an album soon!

Recall that Temi and Mr Eazi have had one of the most beautiful and interesting relationships in the entertainment space and Mr Eazi proposed to Temi in April 2022.