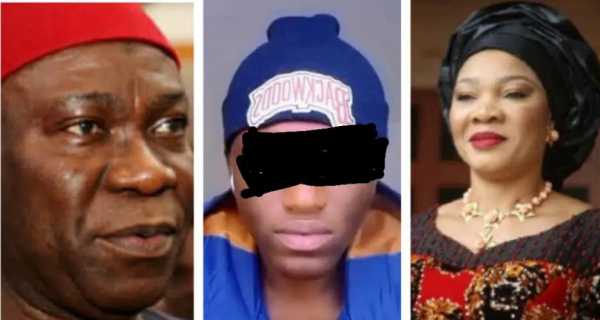 Nigerians have reacted to the alleged photo of 15-year-old donor, David Ukpo Nwamini who was flown to the UK to donate one of his kidneys to Ike Ekweremadu‘s daughter who is down with a kidney ailment.

Recall that Ekweremadu and his wife were denied bail and are remanded till July 7th after they were arrested in London by the Specialist Crime Team of the UK Metropolitan Police for alleged conspiracy to harvest the organ of a child.

In a statement on Thursday, the Metropolitan Police confirmed that the pair conspired to facilitate the travel of a child to the country in order to harvest the minor’s organ.

The police added that the investigation was launched after detectives were alerted to potential offences under modern slavery legislation in May 2022.

However, David’s emerging photo has drawn reactions on social media, as many Netizens thanked God for saving his life.

Some of the reactions below;

One ValCon888 wrote; ”The stingy, greedy politician tried to swindle the poor boy for his kidney. He went for a younger donor because an older guy would have been drinking and smoking. Many of the killings that happen in society isn’t because of money rituals but for organ harvesting.”

One Hoelujohn wrote; ”Na street things Dem run Ekwremadu. The boy intentionally said he was 15 years old . He must have learnt or told that once you are below 16 years in UK, you are regarded as minor and you will be protected. They can’t even deport you if you enter illegally. I am sure the boy has watched UK border force agency programme where he learnt about the loophole in the UK immigration system.”

One TeeGentle wrote; ”Wicked people. They took our money. Now they want to take people life”

One Teerach wrote; ‘‘grin that boy looks way more than 15. I may be wrong though. But it’s either the boy run am streetz or hardship made him old. Either way, serves the senator right. If you had built and equipped hospitals in your state, this issues would have been solved within your state.”

One odimbaa wrote; ”But if the boy consented to it as they said, how did this whole thing get to the public, I hope UK take him in and not deport him to this shithole.”