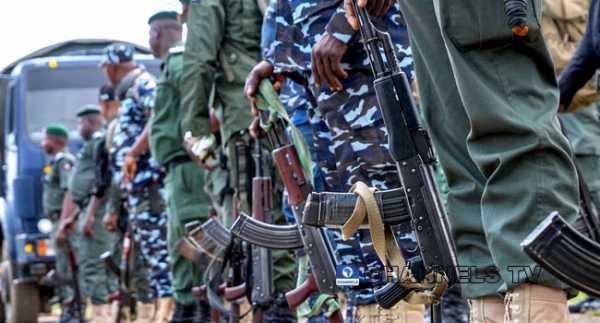 Two policemen have yet to be accounted for following an encounter with gunmen in Kogi State, north-central Nigeria.

The Commissioner of Police in charge of the Kogi State Command, Edward Egbuka, confirmed this to newsmen on Wednesday in Lokoja, the state capital.

Narrating what transpired, he said the missing policemen were on transit and travelling in an 18-seater bus before the incident occurred at Obajana community.

Egbuka disclosed that the security operatives were among the 21,000 personnel deployed by the Inspector General of Police for the just-concluded governorship election in Osun State.

He explained that they were returning from Osun State and on their way to Nasarawa State while the bus conveying them entered Kogi State late in the night.

The police commissioner said the vehicle, while in Kogi, developed a mechanical fault along the New By-Pass Road, some few meters away from the Trailer Park at Obajana Cement Factory.

He recounted that the policemen were making concerted efforts to fix the vehicle before they came under an attack by a group of gunmen who came from the bush and started shooting in their direction.

According to Egbuka, the policemen initially scampered into the bush after a gunfight with the armed criminals, but they later returned to the scene of the attack.

He confirmed that two of the policemen have yet to return, adding that the command has since deployed search teams to the area to recover the missing security operatives.

Meanwhile, some online news platforms reported that the gunmen abducted at least 10 policemen serving in the Nasarawa State Police Command from the scene of the attack.