A man has been spotted on a bike aka Okada donning an Ankara version of the popular Super Eagles jersey.

ALSO READ: [PHOTOS] Actress, Halima Abubakar Breaks Down As Ruggedman Organizes A Birthday Bash For Her

Apparently, there are two original versions of the Super Eagles World Cup jerseys. There is the all green jersey which is the home kit and the pitch green jersey with white and black zig-zag patterns for the away kit. 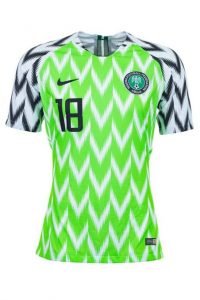 The Okada rider was spotted wearing the Ankara version of the away kit and even the Super Eagles do not have this version yet. The photo of the man has since gone viral earning mixed reactions from web users.

It is no news that Nigerians have been producing imitations of the jersey even before it was officially released by Nike in 2018. Those who can’t afford the original often go for the cheaper option.

See photo of the man below: 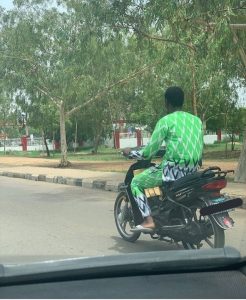