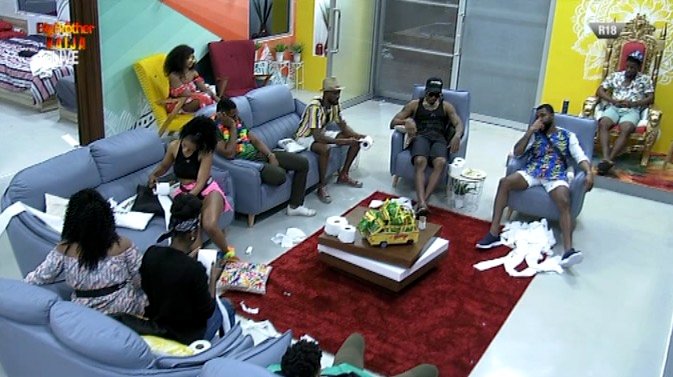 The sales adviser put Tacha, Mike, Ike, Elozonam and Cindy up for possible eviction on Monday.

Surprisingly, all the housemates were allowed to nominate any housemate of their choice in the diary room bringing the results to Cindy, Elozonam, Frodd, Ike, Mercy, Mike and Tacha.

However, Biggie had a plan up his sleeve as he cancelled all the housemates’ nominations to bring out the biggest reveal of the week.

Frodd was was asked to nominate five housemates for eviction and he nominated Cindy, Elozonam, Ike, Mike and Tacha.

Biggie didn’t fail to announce that Mercy has bought the immunity privileges which the housemates took in shock and Seyi cannot be nominated because he is the HoH for the week.

Omashola, Diane, Mercy, Seyi and Frodd are free from nominations and will remain in the house till the 99th day.