Fani Kayode, a Peoples Democratic Party(PDP) chieftain, has asked Africa’s richest man, Aliko Dangote if it is true that his trucks kill Nigerians more than the dreaded AIDS.

Speaking via his Twitter handle, he further asked the business mogul to ask Bill Gates what he can do about it if what he asked him is in affirmative.

The former minister directed the question to Dangote after the latter revealed that it was Bill Gates that opened his eyes to the rots in Nigeria’s health system.

Bill Gates opened my eyes to challenges in Nigeria’s health system-Aliko Dangote. It took Bill Gates to tell you that we have problems in our health sector? Sad!

Meanwhile is it true that your trucks kill more Nigerians than AIDS? If so, ask Bill what to do about it.

See what he tweeted below: 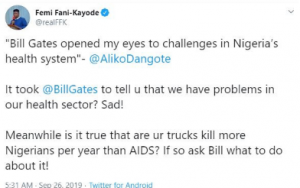