A viral video trending on Twitter showing a man being tied up on an iron bar while being tortured by three soldiers has sparked an outrage among Nigerians. 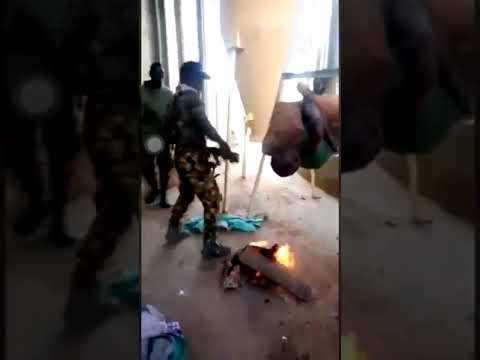 Although, the date of the video was not disclosed, likewise the man’s offense, the men could be heard speaking a mix of Hausa and pidgin English.

In the video, the man is seen dangling over a burning fire while one of the soldiers constantly hit the suspect with the butt of his gun.

One of the soldiers could be heard saying,

“You must feel it now now now,”

“Don’t hit him o…” another said, as his colleague hit him with the butt of the gun.

Many Nigerians have expressed their displeasure over the inhumane treatment meted on the man and some have also called the attention of the Nigerian military to carry out a thorough investigation on the video.