A Twitter user, @uber_that has shared the story of how he received a warning from an internet fraudster, ‘Yahoo boy’ that he should never accept wet money from any of his cohorts.

According to the Twitter user who doubles as a taxi driver, he said he picked up the fraudster at Admiralty way, Lekki area of Lagos state, and engaged in a discussion about embattled suspected fraudster, Mompha.

However, as he was alighting from his car at his destination, he said he was advised by the fraudster that he should never accept ‘wet money’ from any of his gang, without stating his reasons.

See what he shared below: 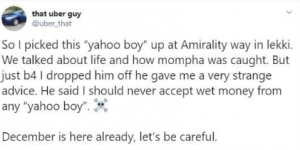