Former Brother Naija housemates, Tobi Bakre from the ‘Double Wahala’ season and Kim Oprah from the on-going ‘Pepper Dem’ season are both in Miami, Florida on vacation.

Recall that Tobi Bakare had sparked dating rumours with Ghanaian actress Yvonne Nelson after the duo spent some quality time together later in September.

Kim, who has been in the U.S for a while visiting different cities, hooked up with Tobi and it’s clear they are both having a good time.

Tobi says, ‘out here in Miami on a short break, milking it excessively’. 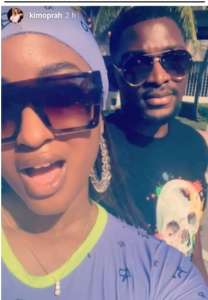