Home National News How Did She Get To Final With Her Maggot Dancing Step? Actress...
Facebook
Twitter
WhatsApp

Yoruba actress Bidemi Kosoko has shared that she does not understand how Diane, an evicted BBNaija housemate, made it to the final of the reality TV show despite her maggot dancing step.

According to the screen diva who spoke via her Instagram page shortly after the beautiful reality TV star was evicted from the show on Tuesday, Diane is supposed to have been evicted a long ago  but for her ‘juju.’

She added that she is yet to fathom how she has been escaping nomination for eviction every week.

‘So bye bye to Diane, her juju don expire. how can she reach final like play like play with that her maggot dancing style? Please don’t come for me. Seriously I don’t know what she is doing in that house all this while. How can she keep escaping nomination every week like seriously? 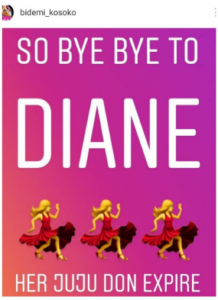 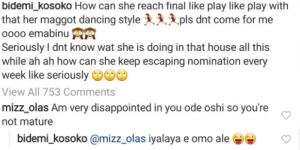