Recall that Rotimi Amaechi, former governor of Rivers state, was recently attacked by members of the Indigenous People of Biafra(IPOB) in Madrid, Spain.

Well, a Nigerian lady identified as Anibueze Juliet on Facebook has called on the Biafra agitators informing them that the former governor is currently in Boston airport.

She called on the group to act fast and not disappoint.

Read Also: “We Didn’t Get Him But We Will Still Beat Him” – IPOB Members Speaks On Plans For Amaechi (Video)

She accompanied her claims with the photo of the ex-governor while sitting in a place that can easily pass for an airport. 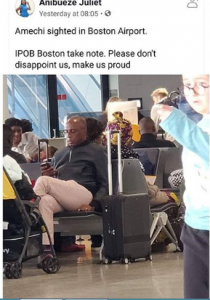