Sapphire scent owner, Wale Jana has described a former Big Brother Nigeria housemate, Cee-C as a wrong brand ambassador whom they had to fire twice before finally firing her.

Also he revealed that the reality TV star once flew to Abuja with her own money just to beg to be retained as a brand ambassador of the company.

He then concluded by saying the company had more peace when fellow ex-housemate, Bam Bam and actress Regina Daniels came on board after she was fired. 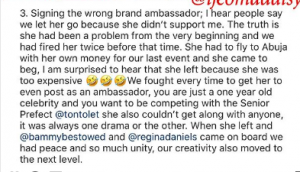