A Twitter user @biyitheplug has alleged that the famous ‘Shakiti Bobo’ dance was not actually Olamide’s own as widely believed.

He said the dance actually belonged to Zlatan Ibile and that Olamide‘s younger brother, DJ Enimoney actually stole the dance step from Zlatan while they were all in Mapoly.Zlatan

He further shared that the dance was called ‘Kuzo’ during his days in the tertiary institution in 2015.

The Twitter user made this known in reaction to Gooden’s tweets which requires people to tweet their random musical fact.

See what he shared below: 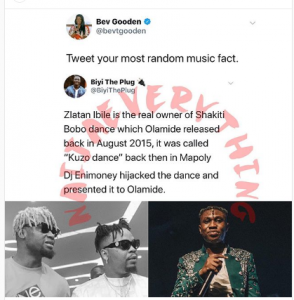