2019 ex-Big Brother Naija housemate, Omashola has shared a photo of his early days modelling career while posing with his Audi 80 car.

The reality TV star hinted that the photo was taken during his days at the Olabisi Onabanjo University, Ago Iwoye, Ogun State.

Read Also: Omashola Buys Benz, Says Getting A Wife Is Next (Photo)

He further revealed that in the photo, he was excited to have made it to the school magazine at the time with the ‘stunning photo.’

Na wa o, Na me be this that year 🙈😂😂. I was so excited I made it to the school magazine with my car Audi 80 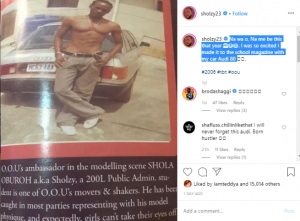