Actress Adunniade has come out to defend her embattled colleague, Funke Akindele who was arraigned by the Lagos state government for flouting the order on social gathering when she organised a birthday party for her husband, JJC on Sunday.

Speaking via an Instagram post, Adunni stated that the actress had all the celebrants in her house two weeks earlier before the celebration.

“If you really do not understand the video she put up then you definitely need help comprehending. She is an extremely careful person and does all she can to to be a Law abiding citizen of this country.


“She has the same set of people around her, living with her. Same people who have been around her before the lock down. she chose to celebrate her husband with her family who have been in the house with her all along. I wish I could say much but damn, this is totally unfair. I hope you are happy whoever you are, wherever you are with this.


“No one is above the law but these folks have been with her for well over 2 weeks.
We read and watch videos all over social media of folks attending weddings, funeral and the cops shutting it down, some harassing them but never for once an arrest. 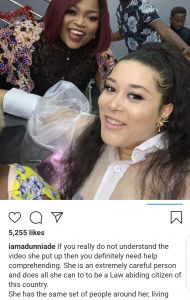