Popular British rapper and songwriter, Stephanie Victoria Allen, known professionally as Stefflon Don, has publicly bragged that her monthly spending is at least 10,000 pounds or more.

The 28-year-old rapper who rose to fame after her 2017 single, “Hurtin’ Me” featuring French Montana, peaked at number 7 on the UK Singles Chart said that is how to be a boss.

The singer and Nigeria afro-fusion singer, Damini Ogulu also known as Burna Boy are romantically linked and they have often displayed public affections. 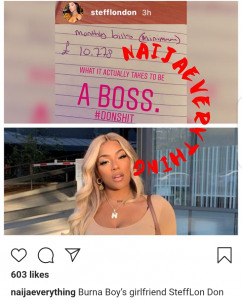