Popular Nigerian crossdresser Bobrisky is not planning on slowing down anytime soon.

Bob, who is also the BFF of controversial actress Tonto Dikeh, is bent on garnering as much attention as possible.

The crossdresser took to social media to share a risque video of herself.

Read Also: Bobrisky Drops New Photo As He Goes To See ‘Boo’ In His Office

Taking to her IG page, the popular crossdresser posed in just a top leaving her bare butt hanging as she laid on the bed flaunting the surgically enhanced behind. 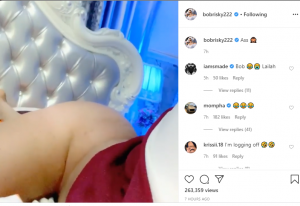 According to Bo ion the video, her any has asked that she goes for yet another plastic surgery to make the butt bigger.